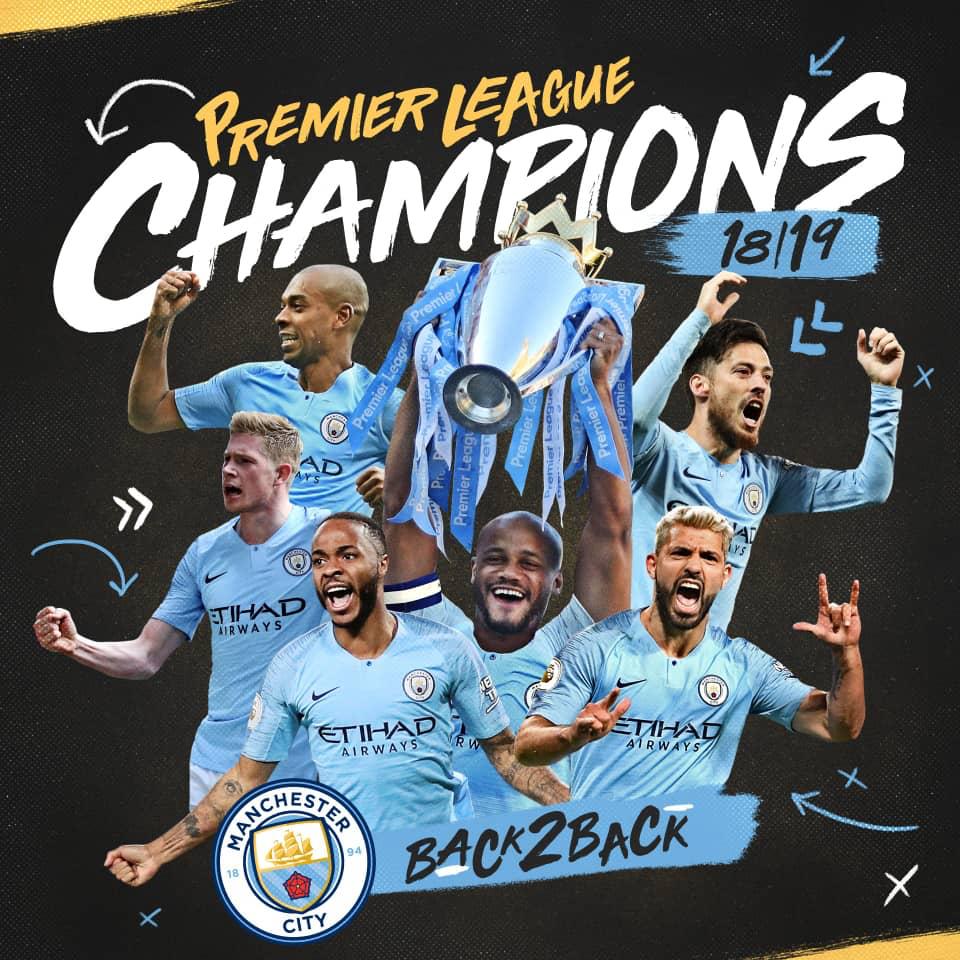 Manchester City successfully retains the Premier League title, after a 4-1 victory over Brighton at the AMEX Stadium, with a point advantage against challengers, Liverpool. Both title challengers, Liverpool & Man City required nothing less than a win, to claim the right as champions of England for 2018/19 season, but it was the Citizens who came out on a top, despite both clubs winning their respective games, City succeeded with an already point advantage, finishing with 98 points from 38 matches to their name, witnessing a successful title retention for the first time in over a decade

Brighton took the lead through a Glenn Murray’s header in the 27th minute, but however, celebrations were soon cut short for the home and Liverpool fans, as Sergio Aguero immediately equalized 83 seconds later, before defender Aymeric Laporte, heading from a corner to put City in the driving seat with a 2-1 lead at half time. Meanwhile in the 2nd half, City assured 3 points and the title in the bag, after Riyad Mahrez scored in the 63rd minute, and a sublime free kick goal by Ilkay Gundogan in the 72nd minute, was more than welcome for City fans and the manager, as any sort of Brighton comeback was now put to rest before the end of the 90 minutes.

Guardiola has now claimed successful title retentions at Barcelona, Bayern Munich & Manchester City, claiming it was one of the most challenging and difficult seasons he had faced as a Manager and praised Liverpool for giving City a tough time. Manchester City showed consistency by winning their last 14 games, without affording to lose any points, they last tasted defeat against Newcastle on 29th January, whereas the same consistency was displayed by Liverpool who were always behind the leader’s tail. However, in the end it was Guardiola’s side, who came out on top, who must be grateful of winning their home game against Liverpool, which allowed City to stay in the hunt for the title race.

The season does not end for City, who are still on course of completing a domestic treble after winning the Carabao cup and the Premier league, all eyes are set on the FA Cup final at Wembley against fellow premier league club, Watford on 18th May. Guardiola said he would already be discussing the summer transfer targets with club director, Txiki Begiristain, to boost the squad, anticipating a tougher challenge for the upcoming 2019/20 season. The Spaniard believes the rest of the teams in the top 6, will be coming with all guns blazing in a hunt to prevent Man City from completing a hat trick of league titles, to which he is already looking forward to a tougher challenge, and comeback much stronger than before.

The season proved one thing for sure, Guardiola has molded the squad into the way of playing his brand of football. Despite immense pressure, the players were able to perform and execute the plans. Confirm the quality of coaching and philosophy instilled in the team, evident by the skills and temperament of the players in the league games.  All football fans will be looking forward already to the next season, as to see how others will recruit and decode City’ tactics, to avoid a 3rd time luck for the Manchester club. As for coming Saturday, Watford will be hoping to come out on top and shock the Citizens with a surprise victory in the FA Final on coming Saturday at Wembley.

previousHowling their way to Europe: Wolverhampton Wanderers FC
nextNo league title, no complains: Klopp and Liverpool have made an impact