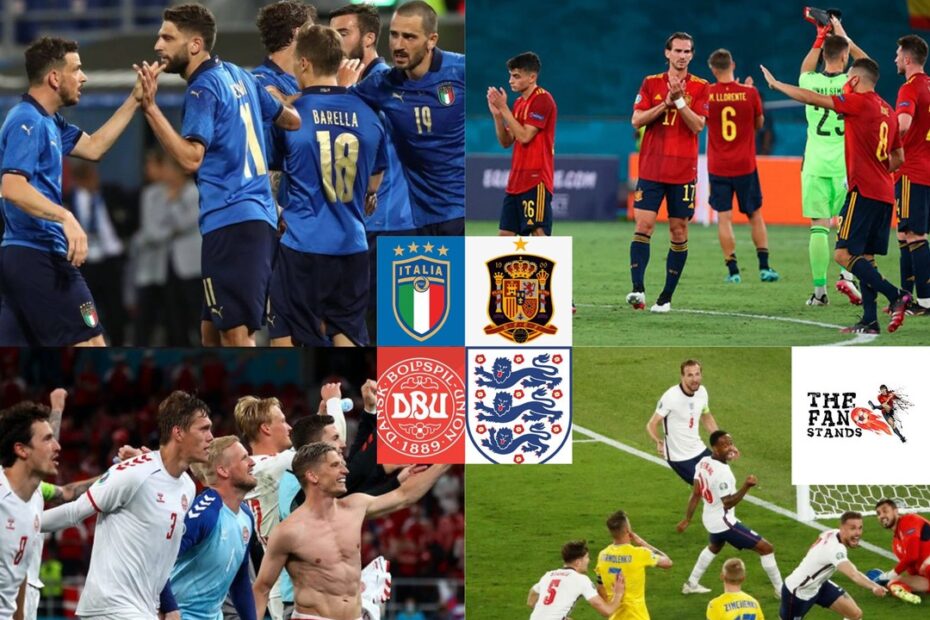 Man! What an amazing tournament this has been so far. Many were critical at the start of the Euros that the football was slow & the 12 different venues across the continent did not seem an attractive idea compared to the traditional single/ co-host format.

However, the football has definitely not continued to disappoint the fans during the course of the summer period, we have witnessed a lot of drama, upsets and good performances, now we are almost closer to crowning a new European Champion. The initial favorites are out, we’re now left with the final 4- we are sure many were not in your expected list of reaching the semis!

Italy started their resurgence under Roberto Mancini and what a run it has been since! They were the dark-horses for the tournament and showed just that in the group stages since their very first game against Turkey in Rome. This Italian side has something different to it, a more vibrant flavor, not afraid to play with fair & of course, the Italians are never short of passion or afraid to display it. They can transition between defence and attack in a matter of seconds. So watch out, if you think you will start out attacking and put them on the back foot, they have an answer. Belgium found out in quarters!

This Spain squad is definitely not the strongest nor the best side on the pitch, especially with the high standards they’ve set in the previous tournaments between 2008-2012. However, they know how to grind the results and avoid defeat so far. Luis Enrique controversially left out Real Madrid players from the squad, for the first time in 32 years this has happened (if my sources are correct). Also not selecting Iago Aaspas may haunt them, as Moreno & Morata have struggled to score consistently and lead the attack but they still have the technical ability and talent in the squad to upset the odds. They will go as underdogs against Italy in the semis.

Ah, England! Good ol’ England! This is a team we love talking about but mostly in a negative sense on how their golden generations have struggled to end their 50+ year international trophy drought. But that may be over as this young talented squad with crop of players ready to give it all are yet to concede a goal in the tournament & their already in the semis! However, in the past we have seen England’s inability to carry on a consistent run when the stakes are high and when the expectations are higher, but they may break that voodoo. Semi finalists 3 years ago (in 2018 WC) & now the Euros, Southgate has wealth of players to start and bench, he just needs to get the combo right according to the style of football they want to play. Is it coming home?

The real underdog story can be repeated again! Neutrals would love that! Their first semi-final since 1992 & that was the year they actually won the Euros that too without their star player- Michael Laudrup! They are in a similar situation (somewhat), they just made it out of their group with just one win and two defeats, they lost their star midfielder- Christian Eriksen to an unfortunate cardiac arrest (Get Well Soon Christian!). If you understand football without focusing on results, you would know this Denmark side cannot be taken lightly, just watch their game against Belgium! They have been a bogey team for England, who they beat at Wembley back in October/ November (2020). Denmark are playing as a strong unit but it will be difficult to break a strong solid English defence, also marking Harry Kane & Raheem Sterling- on form for England in attack.