No league title, no complains: Klopp and Liverpool have made an impact 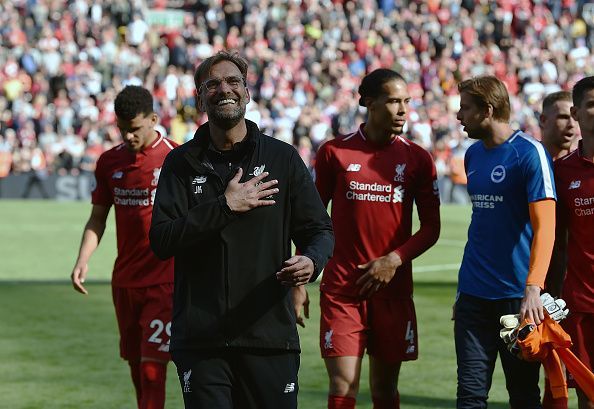 The season saw an exciting battle till the last game of the season between Liverpool and Manchester City in 2018/19, in the end, the blue side of Manchester came out on top. In any of the previous 25 seasons, 97 points with only losing a game (to eventual champions), would have been enough to win the title. If we see an overview, the Reds only conceded 22 goals this season, but had 7 draws, which were the only results anyone could point out as a negative for the season. Even to the fact, their star defender, Virgil Van Dijk was named player of the year for the season.

Despite falling short of domestic trophies this season, no one can argue this was a successful campaign for Jurgen Klopp and his Red men, with hopes still remain for a European Cup final against Tottenham in Madrid in June. The statistics leave anyone confused as to how Liverpool stayed a total of a 163 days at the top and yet not win it. The Reds pushed their title rivals, Manchester City to such extremes that Pep Guardiola required nothing short of a 14 game winning streak to secure the title.

Unlike last season, where City had a relatively easier title run, were given a run for their money this time around. Jurgen Klopp termed the season ‘belief’ and hopes luck will favor Liverpool for their next campaign in search of their first Premier League title. Pep Guardiola claimed this was the toughest season he had as a Manager and praised Liverpool for their high intensity and dominance throughout 2018/19

At the start of the season, many hopes fell on star player, Mohammad Salah, who was the hero from 2017/18 season for Liverpool, winning the golden boot in his debut season with the reds. Despite being called a ‘one season wonder’ after a slow start to the 2018/19 campaign, the Egyptian finished as joint league top scorer with 22 goals, sharing the accolade with team mate, Sadio Mane & Arsenal striker Pierre- Emerick Aubameyang.

This Reds side has provided so many standout performers during the season in the form of Virgil Van Dikj, Sadio Mane, Mohammad Salah, Andrew Robertson, Alison Becker & Trent Alexander Arnold. Speaking of the young English right back, last season made it evident, Liverpool had a player for the future in form of TAA, but his development under Jurgen Klopp, saw him reach new heights this season and there is no doubt that the 20 year old came out as a surprise package, can already be regarded as one of the best right-backs in world football at such a tender age.

He noticeably finished the season with 12 assists, as one of the most by a defender in a Premier League season. Of course, who can forget his cheeky corner & clever piece of play against Barcelona to assist striker, Origi for the win at Anfield against Barcelona

Rival managers, fans, journalists and former players did nothing short of reminding everyone how strong this Liverpool squad was, with only have nothing less than praise and admiration for Liverpool.

Critics would say argue about Liverpool finishing 2nd in the 2013/14 season, a team lead by club great, Steven Gerrard, but it would be wrong to compare the 2 sides. Change in personnel in regards to Management, coaching staff, squad and philosophy, has massively improved the team in the past 5 years.

The team is faster than before, with a younger squad and players who can jolt up and down the pitch from one end to another, they can counter-attack more quickly and efficiently, give away the ball in the defense and before you know it, either of the right backs (Robertson & TAA) will be up in the opposition’s goal, supplying to Mane, Firmino or Salah for the finish.

Apart from the attack, as mentioned earlier, the defense has massively improved with the addition of VVD & new signing of Brazilian goalkeeper, Alison, you can be sure the defenders will be intercepting everything they can in their area.

Such a display was seen during the great 2nd leg comeback against Barcelona in the Champions League at Anfield, where Liverpool managed to turn a 3-0 deficit in to a 4-3 win on aggregate. They managed to keep Messi, Suarez, Coutinho & co, quiet for the entire 90 minutes, something which not many can do, given how dominant they were till that stage in the competition as well as in the Spanish League.

It is a cycle of Jurgen Klopp’s side and the way they play, after the opposition loses the ball to the Liverpool defenders, we may often see a fast counter, leading to an offence at the other end. The front trio of Mane, Salah & Firmino are one of the most destructive force in the league as well as Europe, with over 50 odd goals and 20 plus assists between the team, there are enough reasons for Barcelona and Real Madrid to come out and demanding their services in the upcoming transfer window.

It is very difficult to actually analyze and point where Klopp and the team went wrong. If there are any room for improvements, only the gaffer might know what they are and will demand nothing less than to go the extra mile in the next season, from his squad during the summer training camps.

All praises for Klopp might still not be enough. Unlike previous coaches, who came close (Benitez & Rodgers), the German is very different. There is no doubt, many clubs would welcome his induction as the manager of their side, and he called himself ‘The Normal One’ during a press conference, when journalists referred to him and inquired if he was the new ‘special one’. Klopp invented an attractive brand of football, which he refers to as ‘Heavy Metal Football’.

The only thing required now is for the fans to be more patient and assure they have been made to believe again, he has helped build something special at the club, and came during tough times. It is only a matter of time before Klopp & Co might win the Premier League and other domestic honors, if all goes to plan. There is no argument, Klopp is the right man for the KOP, and the Liverpool fans will forever echo his name for many years to come.

This season saw Liverpool come massively close, players managed to get individual accolades, with the Champions League trophy still up for grab, to win the right to be conqueror of Europe, Klopp made us believe. Danke Jurgen!