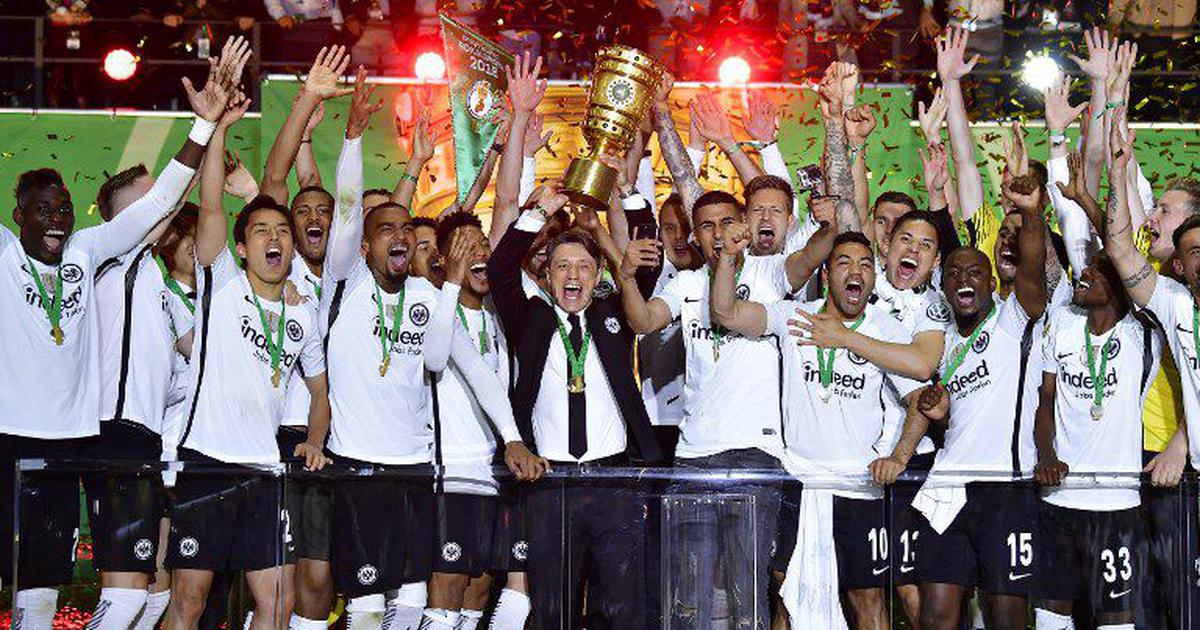 Eintracht Frankfurt has been flying high since their surprise win over Bayern Munich in last year’s German Cup final, defeating the Bavarian club to a 3-1 defeat at the Olympic Stadium, Berlin for their fifth title. The result meant, Eintracht Frankfurt had qualified for the 2018/19 Europa league group stages.

Currently the German club has reached the Europa league semi-finals, meanwhile are also hunting for securing a Champions League spot, who currently sit at fourth place in the Bundesliga. Nicknamed ‘The Eagles’,  Adi Hutter’s side would hope to remain at the current spot for a place in the 2019/20 UCL group stages and aim for greater heights.

Thursday evening saw the Frankfurt club overturn a two-goal deficit from the first leg 4-2 defeat to Benfica in the Europa league quarters, to win 2-0, tying the aggregate score to 4-4, and qualifying on basis of away goals, where they will now face London club, Chelsea in the semi-finals.

The Frankfurt fans have their expectations risen, and the players must adapt quickly to ensure this would become an unforgettable season for the Eagles. The club can earn up to € 4.5 million, by reaching the Europa league final and a further 4 million, if they manage to win, as well as guarantee themselves Champions League football regardless of their position in the Bundes league table. But Frankfurt now face a formidable opposition in form of Chelsea, who are also looking for an alternative route for a ticket to Europe’s elite competition via the Europa league final win.

Alternatively, the club can cash more on in-demand striker Luka Jovic, linked with a move to Barcelona, Bayern and Real Madrid but the club would hope to have him for one more season especially in the Champions league, if they qualify for the group stages.

Luka Jovic, on-loan from Benfica has been an integral part of the Eagles since 2017. The 21 year old Serbian forward has emerged as one of the most exciting player, with 15 Bundesliga goals this season and 8 Europa league goals in 11 matches for the club. The forward received praise from his manager before, who said Jovic is dangerous in the box with both feet and head, and labelled him as a “complete player”.

Niko Kovac, now Bayern coach was managing the Serbian during the 2017/18 season. “I ran more in Frankfurt than I ever did at Lisbon” said Jovic, who also praised Kovac for his ability to get the maximum out of his players. During his first season, Jovic mostly started from the bench, netting in 8 goals from 22 appearances in the Bundes league and also helped in defeating Schalke by scoring a back-heel winner in the semi-finals, setting way for the club to win the German Cup, despite not playing the final against Bayern. He had just done enough to get a nod for the World Cup squad that year in Russia, to play against Chile & Brazil.

The Eagles now face a tough test in hoping to win all their remaining four league games and see-off a two-legged tie against Chelsea on 2nd May at home and away in London on 9th May, in what might be their biggest game since their cup final win over Bayern last year.